Getting computer repairs done today! Hopefully will be able to get back online in a couple of days!=) 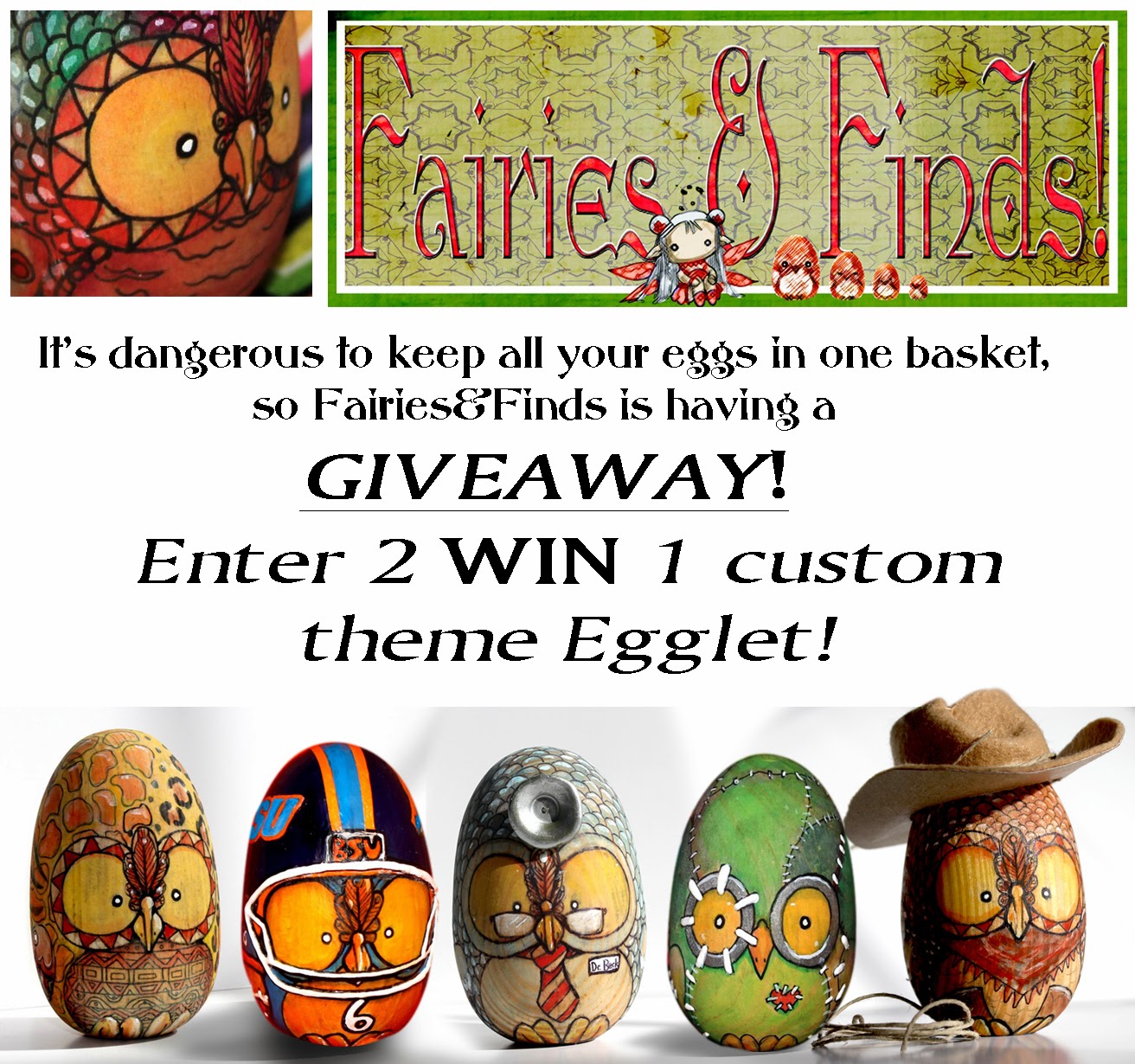 Ok, so I really want to finish this post about how much I appreciate the multiple layers of artistry behind Breaking Bad, but I can't stop watching it long enough to do it. Instead, here are some promo flyers for my Egglet theme pitch contest finalists! Pick a team and comment here (or anywhere here: https://www.facebook.com/FairiesAndFinds) to vote for your favorite Egglet theme idea! Thanks for all the votes so far! It seems to be a  race between the Mad Hatters, and the Beekeepers! Voting ends Friday!


Ok, I am super sorry it has taken me so long to do this, but after considering many possible ways to allow people to vote on all the pitches entered in my Egglet Giveaway, I realized that there were just too many, and it might be difficult to get votes to narrow the field. Instead I decided to pick my top 4, and let voting commence from there! To see a full list of pitches, go here. To see what "Egglets" are, go here (basically they are egg-shaped, hand-painted owlets in various themes! Hello little hats!!)!

So drumroll please? Thank you. These are the top pitches! 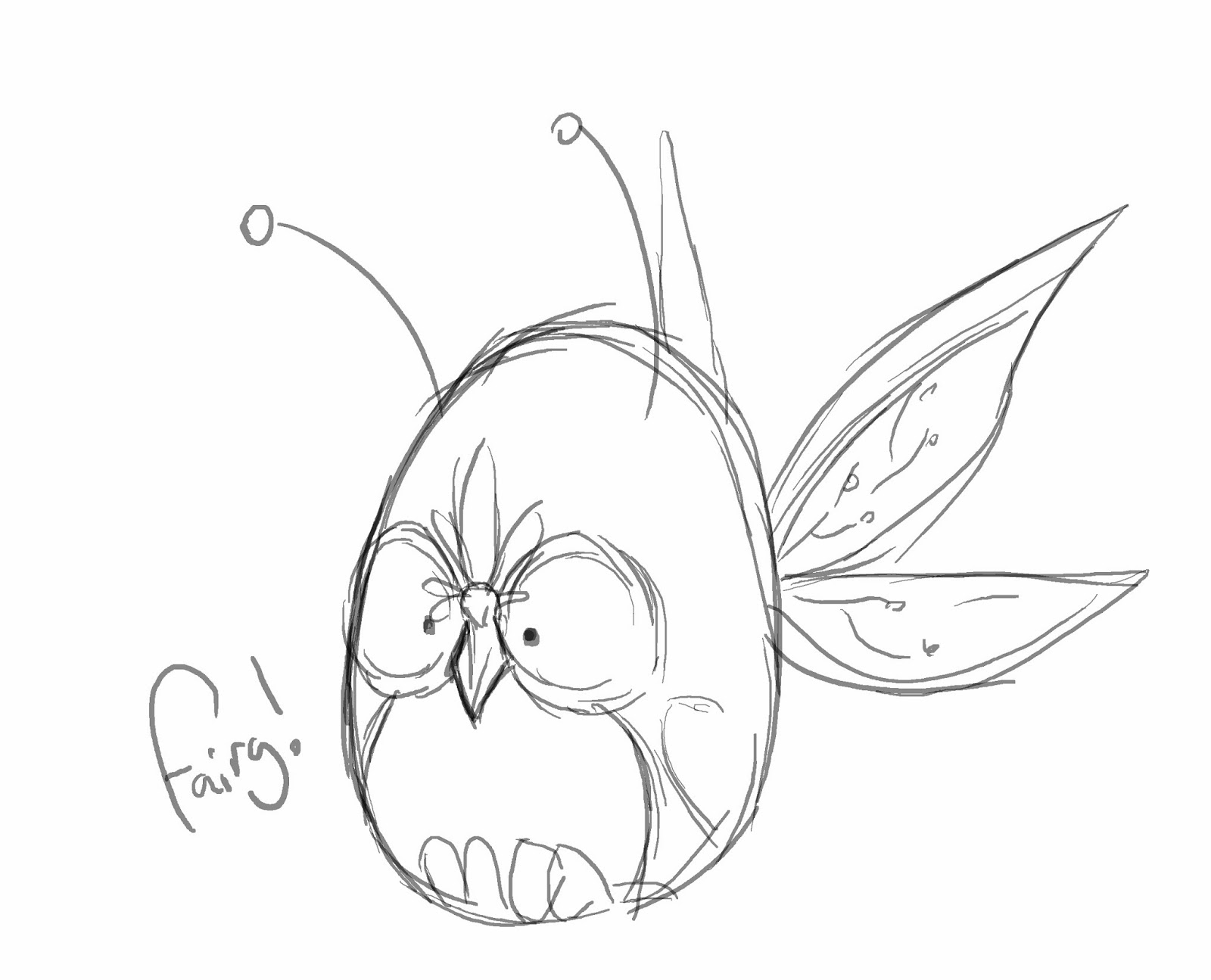 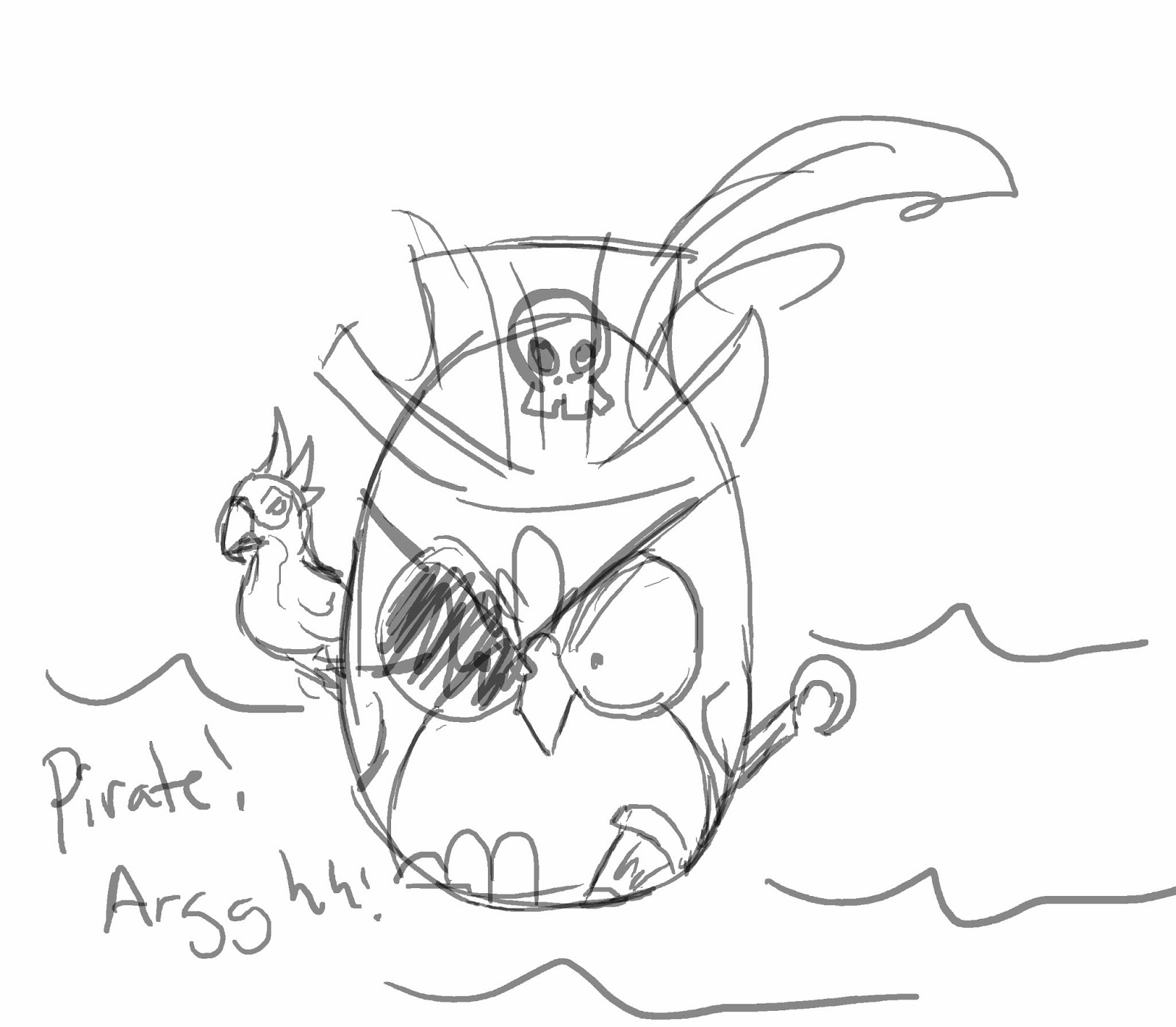 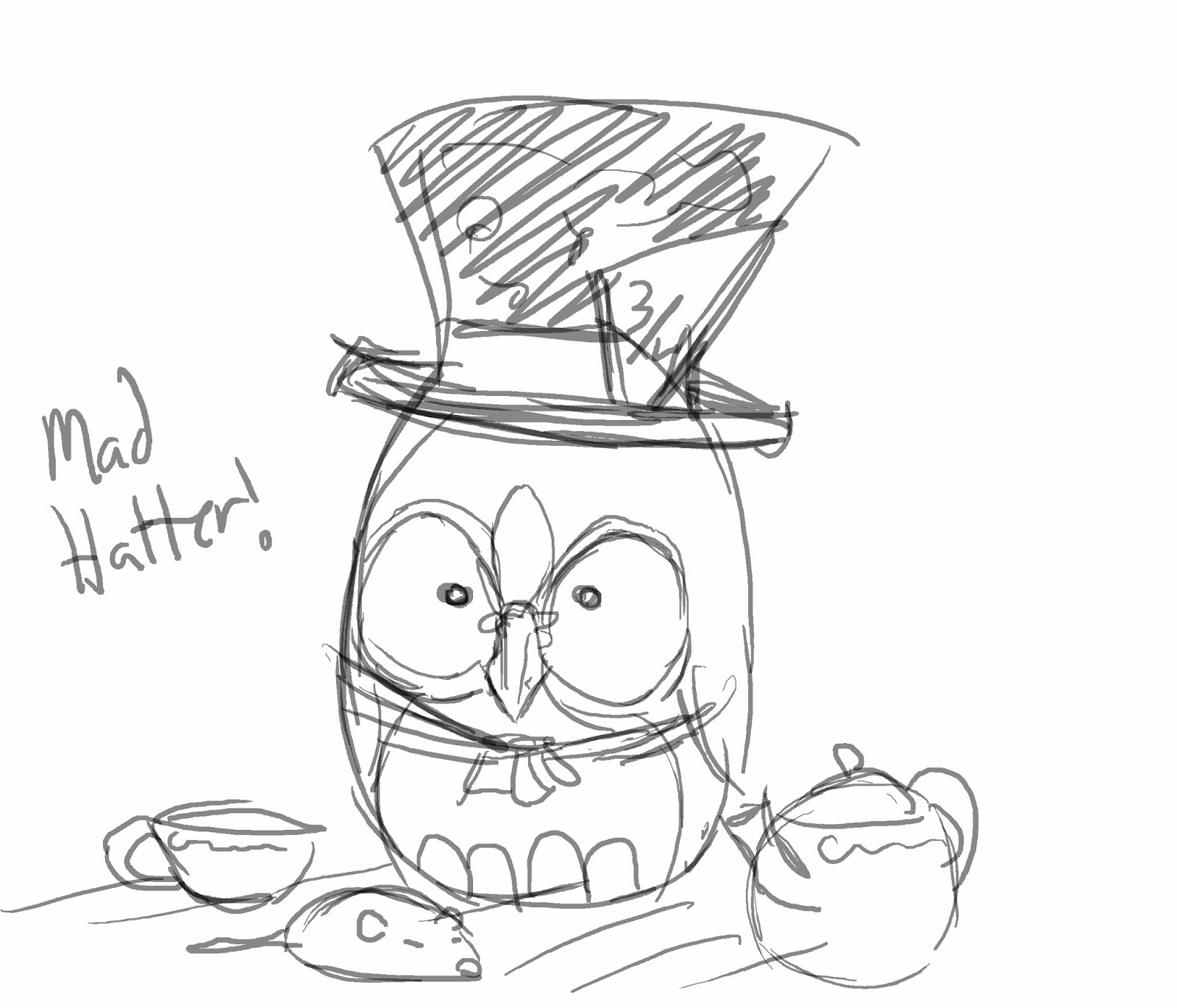 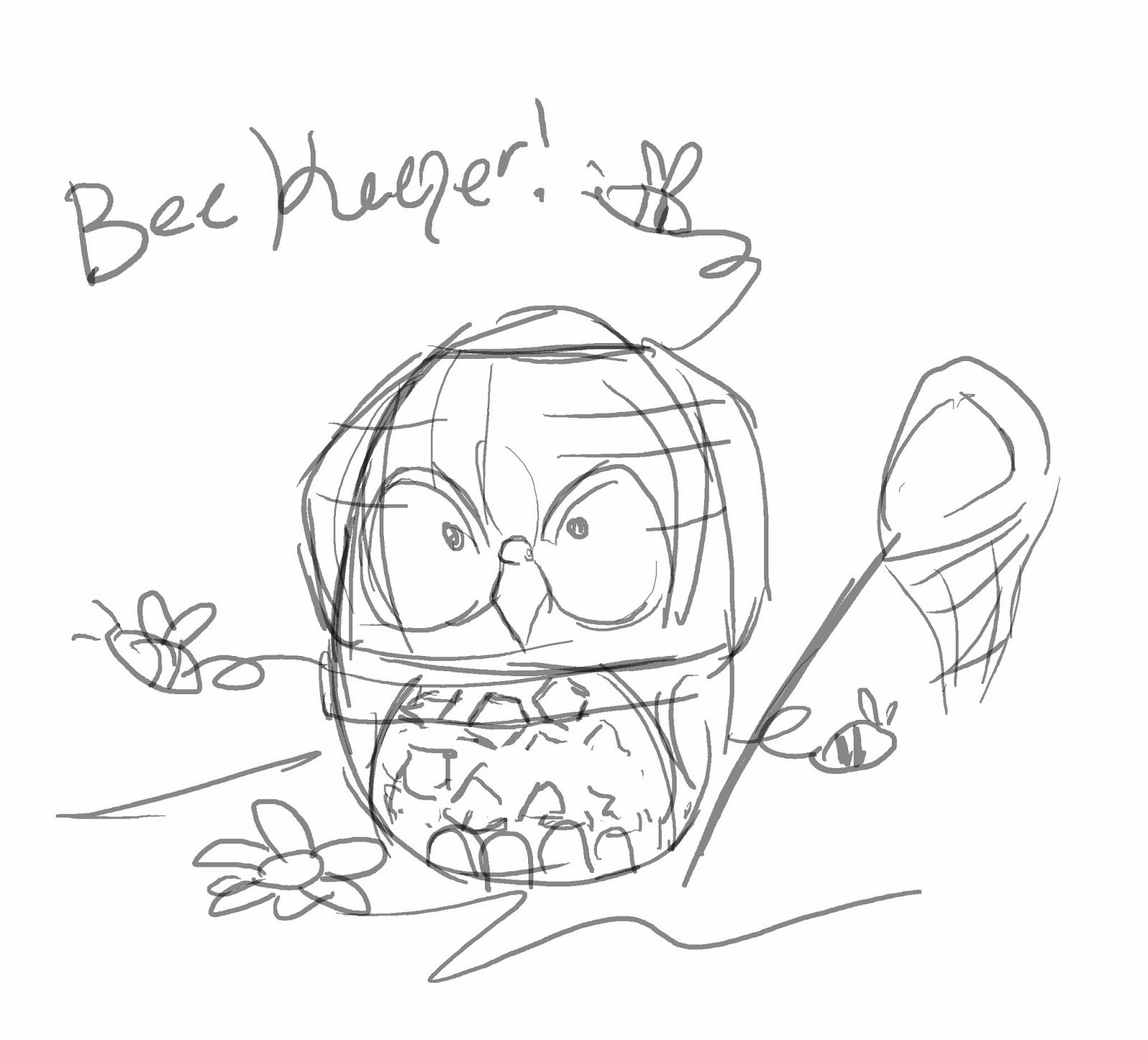 Let me know in the comments which Egglet you want to see made the most!=-) Who should win?
Also, thanks to everyone who entered my giveaway, and thanks for entering so many amazing pitches! Let's get this second winner picked!=)
WHICH OWL SHOULD IT BE!?=-)
Posted by TAH at 2:11 PM 8 comments:

Fanart time!!!
I'm still working on the faces, and I still have a TON of stuff to do on this, but I wanted to post it so far! I HAVE NEVER tried to draw real-ish people before, and I am surprised I did a decent enough job that Facebook wants to tag them!!!!!!!!! If you check out my portfolio, it is ALL cartoony illustration, so this is new territory. Haha, anyway, I have this artist pride/masochist thing, where I don't like to look at reference photos, so I drew the first draft of this without looking at any. Now that I am looking at ref photos, it's hard to find Jesse facing this particular way. I know I don't have his face right, but ah,  I will keep plugging away, and my awesome friend is helping me find photos of him, so I will keep working on it. I am really excited about finishing this! :-)

This morning I was staring at my sister's hoodie, wondering if I should redraw this one. It totally freaked her out. The artist stare is freaky, I suppose.

When this is done I will write a post about my new obsession. Breaking Bad is seriously the most artistic show I have ever seen (especially the last seasons). It makes me want to drop everything, move to LA, and try and become a prop acquirer (how does one get a job like that anyway?), or a set dresser/designer/decorator or...I don't know! Anything in the art department! Or a grip! A coffee person! Anything! I'm not picky! Something!
Posted by TAH at 5:22 PM No comments:

Highlights of the year!


Oh...this is supposed to be about writing? Ok, well, I also sent out my first query.
...
What? That isn't a good enough wrap up? Well okay then, I will try a little harder.

This has been a year of firsts, and I haven't exactly let this blog live up to its title, so it's time for a Writing Revelations winter wrap up! Since this is my first year trying to get my writing out there, I thought I should post my year end stats! :-)
I also really wanted to post this:
Writing stats:

Started querying: March 20th (my birthday!).
Number of queries sent in 2013: 12: 3 from Twitter Pitches, 3 from feedback opportunities, 1 from a contest, 5 regular queries.
Responses: 8 rejections, 1 partial/rejection (That was before I got rid of the italics! So embarassed I sent it like that! Thank you CP for kicking my butt into getting rid of those!), 2 fulls (Both still out!), 1 open query.

I was feeling bad about my queries, but putting them in a list like this, hey! That's not so bad! Not as bad as I thought at any rate! I know 12 is usually what people send out in one day, not 12 in 9 months...but I can't help it that I am slow to query! I like to research first.=)

Regrets: 1: I still haven't sent in a request from PitMad. The second I was about to send the query, I got an email that made me think some revisions were in order. Those revisions took a lot longer than I expected. I am so glad I made the changes, but I feel too embarrassed to send a months late request. I still want to send. I just...uh, maybe it will just be a regular query now.=-\

Contests: From PitMad on I tried to enter as many as I could: Successful contests: 2 twitter pitches (PitMad and PichMas), finalist in NightmareQuery, and Secret Agent.

Other---
Discovered Twitter: I love the writing community!
Found my CP: THE BEST PERSON I COULD HAVE EVER FOUND! A brutal critiquer who is ALWAYS right. A beautiful person/awesome friend!=)

I want to thank everyone who made 2013 amazing. So glad to have found writing friends, both online, and in real life.

Resolutions: I hope to be a little less uptight about sending out queries next year, and I really want to get back to writing as soon as possible. For my own sanity I need to finish Restart, Login's sequel!
Posted by TAH at 6:39 PM 2 comments:

TAH
United States
This blog is dedicated to all the blood, sweat, and inky tears that is writing! My artwork is going to be posted here too, since as much as I want to, I can't keep writing and art separate.=-)